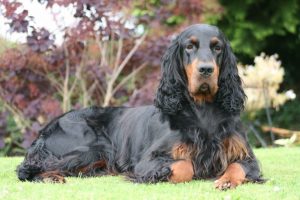 Alexander Gordon – the 4th Duke of Gordon is credited with establishing the breed we know today as the Gordon Setter. Gordon Castle the home of Alexander Gordon situated north of Fochabers was where he established his kennel of Black and Tan Setters. Bred to work on the moor the dogs were prized for their working ability rather than their looks, it was not till later that appearance started to count, originally all the dogs were either black, white and tan, black and white or black and tan.

Alexander the 4th Duke passed away in 1827 and unfortunately it is impossible to go back further than his work, whilst some records show that an early version of the Gordon Setter was first recorded as long ago as the sixteenth century this is not something that we can be certain of. In 1776 Rev. Mr. Simms wrote “Whatever mixtures may have been since made, there were, 50 years ago, two distinct tribes the black-tanned and the orange or lemon and white” however this is not something we have proof of.

Setters are thought to be a descendant of the “setting spaniel,” with many raised on large shooting estates. The breed was used mainly to find grouse – their role being to quarter the ground and locate the birds. This trait has stayed with the breed -If you have ever wondered why your dog runs off it is because many years of breeding have encouraged it to hunt independently

Gordon Setter numbers decreased during the first half of the 20th Century, as the large shooting estates themselves went into decline. In 1923 only 54 Black and Tan Setters were registered with the Kennel Club. Throughout this period the Gordon Setter was rarely seen outside Scotland and by the end of the Second World War the Gordon was becoming more popular as a family pet rather than its traditional role as a working gundog.

Today’s more modern name of the Gordon Setter was granted by the Kennel Club in 1924, in honour of the late 4th Duke of Gordon and the breed has been known as that ever since. Of the differing setter types the Gordon is considered to be both the biggest and heaviest. Whilst they may be lacking the speed of the other Setters and of the Pointer, the Gordon is renowned for its stamina in the field. As a breed Gordons are generally late in maturing, not in their prime until 3 years old or more therefore they require firm handling when young to respond well to training. Despite this late development aside of their ability to work in the field, they make excellent pets.

We must highlight this is a very short history of the Gordon Setter and much more of relevance and interest has been written. For further information or to answer any questions you may have there are many books available which will give you a further insight to your dog and its character.

Bibliography: The Gordon Setter History and Character by Gompertz

The Gordon Setter by Mildred Adams

Stylish dog, with galloping lines. Consistent with its build which can be compared to weight –carrying hunter. Symmetrical in conformation throughout.

Bold, outgoing, of a kindly even disposition.

Head deep rather than broad, but broader than muzzle, showing brain room. Skull slightly rounded, broadest between ears. Clearly defined stop, length from occiput to stop slightly longer than from stop to nose. Below and above eyes lean, cheeks as narrow as leanness allows. Muzzle fairly long with almost parallel lines, neither pointed, nor snipey. Flews not pendulous, clearly defined lips. Nose large, broad, nostrils open and black. Muzzle not quite as deep as its length.

Straight or slightly scimitar, not reaching below hocks. Carried horizontally or below line of back. Thick at root, tapering to fine point. Feather or flag starting near root, long, straight, growing shorter to point.

Steady, free-moving and true, with plenty of drive behind.

On head, front of legs, tips of ears short and fine, moderate length, flat and free from curl or wave on all other parts of body. Feather on upper portion of ears long and silky, on backs of legs long, fine, flat and straight; fringes on belly may extend to chest and throat. As free as possible from curl or wave.

Deep, shining coal black, without rustiness, with markings of chestnut red, i.e. lustrous tan. Black pencilling on toes and black streak under jaw permissible. ‘Tan markings’: two clear spots over eyes not over 2cm. (3/4 in) in diameter. On sides of muzzle, tan not reaching above base of nose, resembling a stripe around clearly defined end of muzzle from one side to other. Also on throat, two large, clear spots on chest. On outside hind legs and inside thighs, showing down from front of stifle and broadening out to outside of hind legs from hock to toes. On forelegs, up to elbows behind, and to knees or little above, in front. Around vent. Very small white spot on chest permissible. No other colour permissible.

Faults Any departure from the foregoing points should be considered a fault and the seriousness with which the fault should be regarded should be in exact proportion to its degree.#